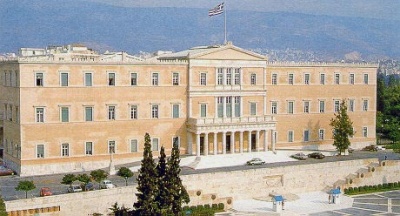 The Hellenic Parliament (Greek: Βουλή των Ελλήνων; transliterated Vouli ton Ellinon; literally 'Council of the Greeks') is the parliament of Greece, located in Syntagma Square in Athens. It is a unicameral legislature with 300 elected members. It was established in 1846 after a civilian rebellion, which resulted in the first constitution of modern Greece. In 1911, a revision of the constitution resulted in stronger human rights, the reinforcement of the Rule of Law and the modernization of institutions, among them the parliament. After seven years of military dictatorship, on December 8 of 1974 a referendum was conducted to decide about the nature of the form of government. By a majority of 69.18%, the Greeks decided against a constitutional monarchy and for parliamentary democracy. 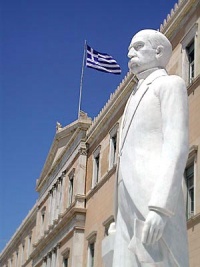 The statue of Charilaos Trikoupis by sculptor Ioannis Pappas, in the courtyard of the Hellenic Parliament Building.

The building, designed by Friedrich von Gärtner, originally served as a palace for the Greek monarch, until 1924, when a referendum abolished the monarchy. For a two year period, the building was used for many different purposes — functioning as a makeshift hospital and a museum, among other things — until September 1926, when the government decided that the building would instead house the Parliament. Improvements are ongoing, some of them significant (such as the addition of an 800-vehicle underground parking structure), to ensure that the building can continue to function effectively.