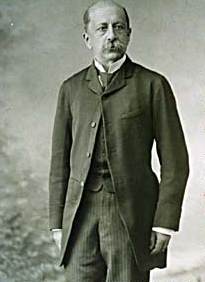 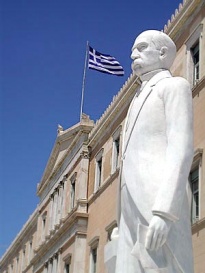 The statue of Charilaos Trikoupis by sculptor Ioannis Pappas, in the courtyard of the Hellenic Parliament Building

Charilaos Trikoupis was a Greek politician who served as a prime minister of Greece a number of times from 1875 until 1895.

Born on July 11, 1832 (O.S.), he was the son of Spiridon Trikoupis, (a politician who was Prime minister of Greece briefly in 1833), and Ekaterini Mavrokordatos (sister of Alexandros Mavrokordatos, who also served as a Prime Minister).

After earning a Ph.D. in Law in Paris, France, he returned to Athens. In 1865 he was elected to the Greek parliament, briefly serving as a minister of Foreign Affairs. In 1872 he created his own party called "Pempto Komma" ("Fifth Party"), on a reformist agenda. In 1874 he published a manifesto entitled "Who's to blame?", naming the King as the answer. Specifically, he condemned the king for bypassing parliamentary opinion in his selection of Prime Ministers. The article landed him briefly in jail, but also boosted his popularity significantly. A year later, on May 8, 1875, he mustered a parliamentary plurality and King George I of Greece reluctantly named him as Prime Minister.

Trikoupis immediately set into a program of aggressive reforms. Among his first acts was the reform of election law and the establishment of the 'dedilomeni' principle (that the king would appoint the leader of the party with a plurality of parliamentary votes as the Prime Minister). The elections that followed on October 4 1875 were considered the most honest elections held to that date in Greece; Trikoupis lost.

The dedilomeni principle had the natural consequence that Greece quickly became a two-party state as smaller parties merged in an effort to form a plurality. With ever-changing alliances in parliament and fluctuating election results Greece went through 12 prime ministers in the next 6 years. Trikoupis headed 3 of these short lived governments.

Trikoupis was able to form a relatively stable government on March 15 1882 which lasted for more than 3 years. During that period he was able to push through an aggressive program of reforms. His was a strong believer in the need to create an infrastructure to support the economy, and to attract foreign investment. An aggressive program of road and railroad construction significantly improved internal communications. The most important of the works he campaigned for was the digging of the Corinth Canal.

One project that Trikoupis envisioned during that period was a bridge to connect the cities of Rion and Antirion across the Gulf of Corinth. The bridge was way beyond the technical and financial abilities at that time; construction began more than a century later. The bridge, officially named the Charilaos Trikoupis Bridge in his honour, was completed in 2004.

His sixth turn in office (June 22 1892–May 15 1893) was a dramatic one. The country's treasury had been depleted by overspending and systemic corruption. Trikoupis stood before parliament and made the most famous statement of his career: "Regretfully, we are broke". Service of foreign loans was suspended, and all non-essential spending was cut.

Trikoupis was again in power from November 11 1893 until January 24 1895. It was during that time that the planning for the 1896 Summer Olympics was held. Trikoupis was sceptical about the games, fearing that the country could not burden the cost. He was convinced, however, to host them, and made the needed arrangements. This would be his last stay in office.

After 1895, in poor health and poor personal finances, he withdrew from politics. He died a year later - March 30, 1896 - in Cannes, France, and was buried in Athens.