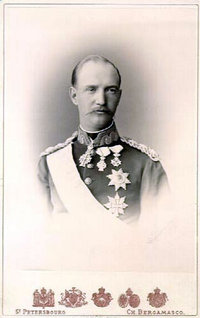 He was born in Copenhagen, the second son of King Christian IX of Denmark and the brother of Alexandra of Denmark (consort of King Edward VII of the United Kingdom). He began his career in the Danish navy, and was elected King of the Hellenes on March 30, 1863 following the deposition of King Otto.

The new king, now only 17 years old, quickly learned Greek in addition to his native Danish. During a trip to Russia to meet with his sister Dagmar (consort to Tsar Alexander III) he met Olga Konstantinovna of Russia, a Grand Duchess of Russia, cousin of the Tsar, and fell in love. They married in 1867.

When alone with his wife, he usually conversed in German. Their children were taught English by their nannies, and when talking with his children he therefore spoke mainly English.

He ruled Greece with some success, overseeing the consolidation of Greek rule over Thessaly and Epirus and the putting down of rebellion in Crete. However, following the First Balkan War, he was assassinated by Alexander Schinas in Thessaloniki on March 5, 1913 (old calendar) / March 18, 1913 (new calendar).