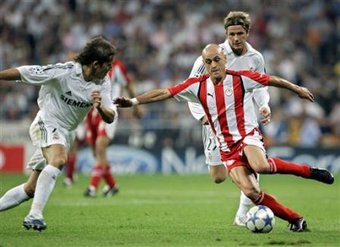 Grigoris Georgatos (Born October 31, 1973 in Piraeus), also know as "Trellos Karaflos" - the mad bald man - is a former Greek Football player, who played as a defensive or attacking left-side winger.

Georgatos started his carreer in Panachaiki FC in the 1992 season. He played for the Patra-based club for four and a half years until he was signed by Greek giants Olympiakos in the 1996 season. Georgatos quickly became known for his excellent crossing and creativity and he caught the eye of Inter Milan who signed him for the 2000 season for 7 million Euro. He played 28 matches and scored 2 goals. He was labelled as the "Greek Roberto Carlos" by Inter's fans.

Georgatos became homesick and moved back to Greece, on loan, to his beloved Olympiakos. He returned to Inter the following year, at Christian Vieri's insistance, but only played in 10 matches scoring 1 goal. Once again he returned to Greece and played one and a half seasons for AEK Athens (2002 -2003) before returning to Olympiakos where he ended his career in 2007.