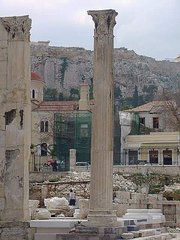 Restoration work for the Library

The impressive complex of Hadrian’s Library is located in Plaka, a few meters north of the Roman Agora, not far from the train stop of the same name. It is the work of Emperor Hadrian, the great benefactor of Athens, who wanted to create a peaceful spot near the bustling bazaar, a place for reflection and pondering. It was built in A.D. 132.

The ground plan of the library complex was very similar to that of the Roman Agora, making one wonder whether it was Hadrian's intention to juxtapose the social character of Augustus’ creation with a structure that addressed the inner man. The complex comprises of a huge atrium surrounded by four arcades looking onto the open peristyle courtyard.

This rectangular building is 82 meters wide and 122 meters long with a Corinthian propylon on the west side. There is an impressive colonnade running down the façade, which happens to be the best preserved part of the whole monument. In the middle of the courtyard – try and picture it as strolling grounds – there was an oblong reservoir that probably used to be a fountain. There are three projecting conches on each of the long sides, ideal for quiet talks away from the sun. The library itself was situated in a vast central hall on the eastern side of the complex, surrounded by two smaller rooms, possibly studies for visitors. On each side of the eastern wing there were two halls with successive rows of stone benches, correctly assumed to have been lecture halls.

Pausanias visited the library a little while after the construction was completed and said of its luxury: «There are halls of alabaster with gilded ceilings, decorated with statues and paintings. And these halls contain books». It’s easy to imagine elderly scholars studying the papyruses and the parchments of the great Classics and taking relaxing strolls in the atrium’s garden while discussing the latest philosophical theories. Hadrian’s Library remained an oasis for the intellectual for more than 130 years, until it was destroyed by the barbarian Herulae during the sack of Athens in 267 A.D.

It was subsequently incorporated into the Late Roman fortification wall. It was repaired by the Roman eparchus Herculius in A.D. 412, and in the 5th century the quatrefoil building of the Early Christian church was constructed in the centre of the peristyle court. After its destruction, a three-aisled basilica was erected on its ruins in the 7th century, which was in turn superseded by the single-aisled church of Megale Panaghia, in the 11th century. During the Turkish occupation it became the seat of the Voevode (Governor) and in 1835, the barracks of king Otto were erected in the place of the Voevodalik.

The first excavations on the site were carried out by W. Doerpfeld and St. Koumanoudis, in the central and eastern part of the monument, after the great fire of 1885, which damaged the Agora (Bazaar) and the church of Megale Panaghia.

Between 1942 and 1950 a second excavation campaign was conducted by the Italians, and later by A. Orlandos and I. Meliades. Between 1970 and 1980, J. Travlos carried out excavations at the NE auditorium and the quatrefoil building. Since 1987 the 1st Ephorate of Antiquities has been conducting systematic excavations in the west section of the monument.

In the years 1960-70 restoration work was carried out at the west facade and the colonnade of the basilica of Megale Panaghia, and in 1975-76 the Propylon was consolidated. The 1st Ephorate is currently preparing a study for the reconstruction of the Propylon and the south wing of the facade of the building.