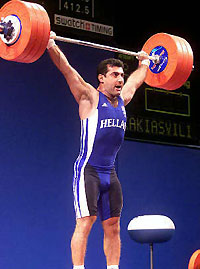 Kakhi (Akakios) Kakhiasvili was born on July 13, 1969 in Tsinvali Georgia. His mother, Maria Labrianidi, was Greek. He returned to his roots in October 1994. He is 1.78m tall and he belongs to the Milon Club.

He is a graduate of the National Polytechnic Institute and a First Lieutenant in the Greek Air force.