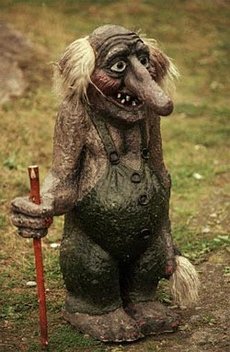 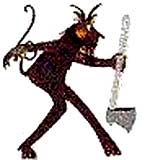 A Kallikantzaros (Καλλικάντζαρος) pl. Kallikantzaroi is a malevolent goblin in Greek folk tradition. They dwell underground but come to the surface from 25 December to 6 January (from the winter solstice for a fortnight during which time the sun ceases its seasonal movement).

It is believed that Kallikantzaroi stay underground sawing the World tree, so that it will collapse, along with Earth. However, when they are about to saw the final part, Christmas dawns and they are able to come to surface. They forget the Tree and come to bring trouble to mortals.

Finally, on the Epiphany (6 January), the sun starts moving again, and they must go underground again to continue their sawing. They see that during their absence the World tree has healed itself, so they must start working all over again. This happens every year.

There is no standard appearance of Kallikantzaroi, but some Greeks have imagined them with some animal parts, like hairy bodies, horse legs, or boar tusks.

There were ways people could protect themselves during the days when the Kallikantzaroi were loose. They could leave a colander on their doorstep: if a Kallikantzaros approached for his evildoings, he would instead decide to sit and count the holes until the sun rose and he was forced to hide. The Kallikantzaroi also could not count above 2, since 3 is a holy number, and by pronouncing it, they would kill themselves.

Legend has it that any child born during the twelve days of the Saturnalia (17th through 23 December) was in danger of becoming a Kallikantzaros. The antidote: Binding the baby in tresses of garlic or straw, or singeing the child's toenails.

In Greek language Kallikantzaros is also used for every short, ugly and usually mischievous being. If not used for the abovementioned creatures, it seems to express the collective sense for the English words leprechaun, gnome and goblin.