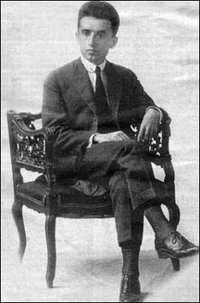 Kostas Karyotakis (Greek:Κώστας Καρυωτάκης) (October 30, 1896, Tripoli, Greece - July 20, 1928, Preveza, Greece) was a Greek poet considered one of the most representative Greek poets of the 1920s and one of the first poets to write about modernism in Greece. His poetry conveys a great deal of nature imagery and traces of expressionism and surrealism. The majority of Karyotakis' contemporaries viewed him in a dim light; after his suicide, however, many began to hold the view that he was indeed a great poet. He had a significant influence on later Greek poets.

His father's occupation as a county engineer resulted in Karyotakis' changing homes frequently in his youth. During his childhood he lived in many locations in Greece, including Argostoli, Lefkada, Larisa, Kalamata, Athens and Chania.

He started publishing poetry in various magazines for children in 1912. After receiving his degree from the Law School of Athens, he became a clerk in the Prefecture of Thessaloniki. However, he greatly disliked his work and could not tolerate the bureaucracy of the state, which he wrote about often in his poems. His prose text "Catharsis" ('purification') is characteristic of this. For this reason he would often be removed from his posts and transferred to other locations in Greece. During these removals he became familiar with the boredom and misery of the country during those unpleasant times World War I.

In February of 1919 he published his first collection of poetry: The Pain of Man and Things, which was largely ignored or badly criticized by the critics. In the same year he published with his friend Agis Levendis a satirical magazine called The Leg, which despite its success was banned by the police after the sixth issue.

In 1921 he published his second collection called Nepenthe. At that time he began having an affair with the poet Maria Polydouri who was his colleague at the Prefecture of Attica. In 1924 he traveled abroad, visiting Italy and Germany. In December 1927 he published his last collection of poetry: Elegy and Satires.

In February 1928, Karyotakis was transferred to Patra and in June 1928 to Preveza. From there he sent desperate letters to friends and relatives describing the misery he felt in the town. His angst is felt in the poem "Preveza" which he wrote shortly before his suicide. On the 20th of July he went to Monolithi and kept trying to drown in the sea for ten hours, but failed in his attempt. In the subsequent morning he returned home and left again to purchase a revolver and went to a little café. After smoking for a few hours, he went to a nearby seashore called Agios Spyridon and there, under an eucalyptus, shot himself in the head. His suicide letter was found in his pocket.