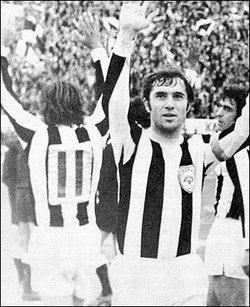 Kyriakos "Koulis" Apostolidis is a former footballer who played for PAOK Thessaloniki during the 1960s - 1970s era.

Apostolidis was born in Thessaloniki in 1946. He joined PAOK in 1959 making his debut with the first team in 1963.

In 1965, Apostolidis left for studies in the United States. Along with his studies he played football for several clubs: The Greek Americans in the San Francisco amateur league, the varsity team of the University of San Francisco, and the Vancouver Royals, the Oakland Clippers and the Dallas Tornado of the NASL. Apostolidis won top scorer honours in the NASL in 1969. During his years in the USA, he was known as "Kirk Apostolidis".

Apostolidis was capped six times by the National Football Team of Greece.