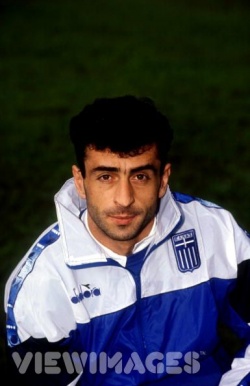 Kyriakos "Koulis" Karataidis is a former Greek footballer whose career spanned the last two decades of the 20th Century.

Karataidis was born in Kastoria, western Macedonia, Greece, on July 4, 1965. He started his football career with local club Kastoria FC until he was brought to Olympiakos in 1988 by then-President George Koskotas.

Karataidis became a mainstay in the defence of Olympiakos for the next 13 years. He retired in 2001 after breaking the record for most appearances by an Olympiakos player, both domestically and internationally.

During his career Karataidis was capped 34 times by Greece and was a member of the squad that participated in the 1994 finals in the US.