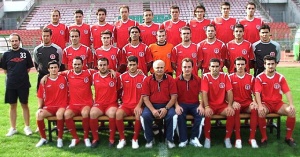 Kozani Football Club is a professional football (soccer) club based in the city of Kozani, Macedonia.

The club was founded in 1964, after the merge of two local clubs, Makedonikos Kozani and Olympiakos Kozani. Both parent clubs were founded in 1928 so the new club put the year 1928 in the club badge which also features the prominent clock tower located in the Kozani town main square.

Kozani FC have never played above the Second Division (and that was mainly in the 60s and 70s), but have produced many players over the years that have played in the First Division.