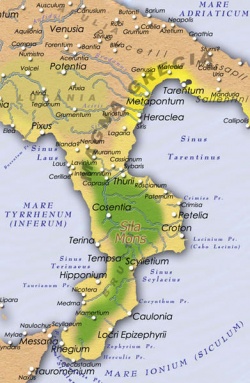 Magna Graecia around 280 BC.

Magna Graecia (Latin for "Greater Greece," Greek:Μεγάλη Ελλάς) is the name of the area in Southern Italy and Sicily that was colonised by Greek settlers in the 8th century BC, who brought with them the lasting imprint of their Hellenic civilization.

In the eighth and seventh centuries BC, for various reasons, including demographic crisis (famine, overcrowding, climate change, etc.), the search for new commercial outlets and ports, and expulsion from their homeland, Greeks began to settle in southern Italy (Cerchiai, pp. 14-18). In this same time, Greek colonies were established in places as widely separated as the eastern coast of the Black Sea and Massalia (Marseille). They included settlements in Sicily and the southern part of the Italian peninsula. The Romans called the area of Sicily and the foot of the boot of Italy Magna Graecia (Latin, “Greater Greece”), since it was so densely inhabited by Greeks. The ancient geographers differed on whether the term included Sicily or merely Apulia and Calabria — Strabo being the most prominent advocate of the wider definitions.

With this colonization, Greek culture was exported to Italy, in its dialects of the Ancient Greek language, its religious rites and its traditions of the independent polis. An original Hellenic civilization soon developed, later interacting with the native Italic and Latin civilisations. The most important cultural transplant was the Chalcidean/Cumaean variety of the Greek alphabet, which was adopted by the Etruscans; the Old Italic alphabet subsequently evolved into the Latin alphabet, which became the most widely used alphabet in the world.

Following the Pyrrhic War, Magna Graecia was absorbed into the Roman Republic

During the Early Middle Ages, following the disastrous Gothic War, new waves of Byzantine Christian Greeks came to Magna Graecia from Greece and Asia Minor, as Southern Italy remained loosely governed by the Eastern Roman Empire. The iconoclast emperor Leo III appropriated lands that had been granted to the Papacy in southern Italy[1] and the Eastern Emperor loosely governed the area until the advent of the Lombards then, in the form of the Catapanate of Italy, superseded by the Normans. Moreover the Byzantines would have found in Southern Italy people of common cultural root, the Greek-speaking eredi ellenofoni of Magna Graecia.

Although most of the Greek inhabitants of Southern Italy became entirely Italianized (as Paestum had already been in the 4th century BC) and no longer spoke Greek, remarkably a small Griko-speaking minority still exists today in Calabria and mostly in Salento. Griko is the name of a language combining ancient Doric, Byzantine Greek, and Italian elements, spoken by people in the Magna Graecia region. There is rich oral tradition and Griko folklore, limited now, though once numerous, to only a few thousand people, most of them having become absorbed into the surrounding Italian element. Records of Magna Graecia being predominantly Greek-speaking, date as late as the eleventh century (the end of Byzantine domination in Southern Italy).

Today a small minority of around 30,000 Greeks live in the Italian regions of Calabria and Apulia; speaking the Grico language. Though Grico is closely related to the koine, or common Greek, which had spread throughout the Mediterranean in Hellenistic times, it is said to maintain some elements of Doric Greek, and some believe its origin may ultimately be traced to the colonies of Magna Graecia.