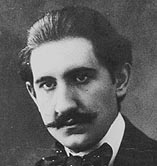 An early picture of Manolis Kalomiris 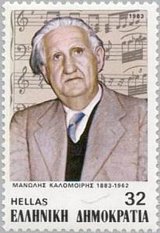 Born December 14, 1883, Manolis Kalomiris' activities as composer, author, teacher, critic and manager shaped Greek musical life to a considerable extent during the first half of the 20th century.

Kalomiris started his musical education in Athens and Constantinople and completed it in Vienna between 1901 and 1906. After spending four years as a piano teacher in Kharkov, in what is today the Ukraine and was then part of Imperial Russia, he settled permanently in Athens in 1910.

Kalomiris founded two of the most important Conservatories in Greece:

He also founded the Union of Greek Composers.

He served, for a time, as director of the National Opera

In 1945, Kalomiris became the first musician to be elected member of the Athens Academy.