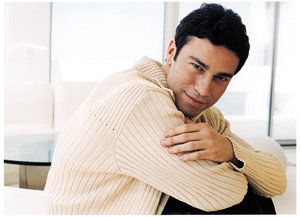 Born December 17, 1967 in the African nation of Zimbabwe – then called Rhodesia – Mario Frangoulis was sent to Athens at the age of four to be raised by his aunt, a decision which stemmed from the volatile political situation in his birth country. Growing up in Greece the youngster would sing along to tunes on his record player, with boyhood tastes ranging from traditional Greek vocalists to Frank Sinatra and Barbra Striesand. As he matured, he became aware that he had a good voice.

He began studying violin and, when he was 17, attended London's Guildhall School of Music and Drama. There he became active on the musical theatre scene, eventually landing a handful of roles in the West End. It was during this stint treading the boards that a friend of his, a soprano, asked him to perform a few bars with her as she practiced. She suggested that he try Opera. Willing to try his hand at the genre, he learned three arias and went on, in 1993, to win the Maria Callas Prize, an international opera competition. This achievement was followed by a scholarship to New York's famed Julliard School of Music.

At first the accomplished singer resisted attempts to define his sound as operatic.

Then came a turning point. After seeing a contemporary stage performance of La Boheme directed by innovative Moulin Rouge filmmaker Baz Luhrman, Mario underwent a sea change of opinion. "That show made me realise there is hope of bringing opera to people my own age," he says. "And that the way to do it is through the purity of the music." Hence Mario's repertoire includes such popular modern tracks as The Rose and Imagine as well classic arias sung in Italian, Greek, Spanish and English. "I'm a classical opera singer with pop appeal," he says.

Along with his good looks – on the eve of the release of Sometimes I Dream he was featured in a fashion piece for the New York Times – it has proved a winning combination and helped make the Athens-based singer something of an operatic heart-throb. "I'm not putting myself across as this major opera star," he says. "I'm just being Mario, a simple guy who does good music."

In addition, 2005 saw the release of his latest album Garden of Wishes. It is a Greek album with original songs written by the poet Karasoulos Paraskevas.