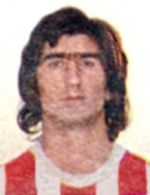 Martin Novoselac (born 10 November, 1950 in SFR Yugoslavia) is a former Croatian footballer known best for his solid defensive skills in clubs throughout Eastern Europe. Novoselac began his career at Yugoslavian club Vojvodina Novi Sad where he impressed so quickly, he earned a spot on the Yugoslavian national football team. Larger clubs soon came calling, as Croatian giants Dinamo Zagreb acquired the defender for 3 seasons before he caught the eye of Olympiakos. With the Piraeus club, Novoselac won 2 Greek Championships and got to showcase his skills in the European Club Championship. In 1984, he retired with Dinamo Vinkovci.

After retiring from playing the game, Novoselac established an incredible career coaching and developing youth football in Croatia. For a long while, Novoselac coached the Croatia national under-21 football team, guiding them to such tournaments as the 1999 FIFA World Youth Championship and the 2004 UEFA European Under-21 Football Championship. Achieving great success, Novoselac was even considered for the Croatia National Team job.[1] Currently, he is the head of the Croatian Football Federation's youth development program.

His career in Greece