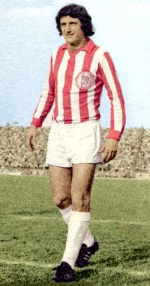 Milton Viera is a former Uruguayan football midfielder of the 1960s - 1970s era.

Viera played for Nacional Montevideo until 1968 when he moved to Argentinian outfit Boca Juniors. The following year, he returned to Uruguay to play for Penarol.

Viera transferred to Olympiakos Piraeus in 1972 and played for the red-and-whites until 1977 when he joined AEK. He won the Greek championship five times (three times with Olympiakos and twice with AEK) and the Greek Cup twice (once with each team).