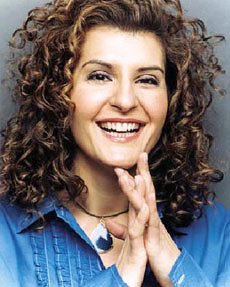 Nia Vardalos is the writer and star of the movie My Big Fat Greek Wedding, a low-budget, independently produced feature that became one of the biggest box office hits of 2002. Based on her own family background, the screenplay was adapted from Vardalos's stage play (she received financial support from actors Tom Hanks and Rita Wilson).

Made for under $5 million, "My Big Fat Greek Wedding" was released in April 2002 by HBO Independent Productions with little if any pre-release fanfare-including virtually no television advertising or billboards-yet somehow the film was able to attract an audience.

The film's success catapulted Vardalos to national fame, and spawned 2003's My Big Fat Greek Life, a CBS television series based on the movie. The series, which had actually been picked up for development prior to the film's release after a CBS executive happened to catch Vardalos' show at the Just for Laughs International Comedy Festival in Montreal, was revamped at the last minute to pick up where the film left off rather than re-tell the courtship story.

Vardalos is married to actor Ian Gomez, who is of Russian Jewish and Puerto Rican descent and who appeared in her hit film My Big Fat Greek Wedding.

As of 2004, her latest work is the movie Connie and Carla, which co-starred Toni Collette.