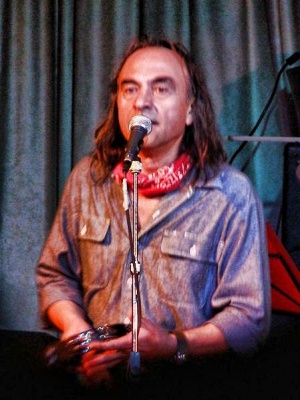 Nikos Papazoglou (20 March 1948–17 April 2011) was a Greek singer-songwriter. He was born in Thessaloniki, Papazoglou became the leader of the so-called Thessaloniki school of contemporary, popular Greek music, which included fellow Thessaloniki-born-and-bred artists such as Socrates Malamas and Melina Kana.

Papazoglou became actively involved in the music industry in the mid-1960s, as a member of various Thessaloniki bands. In 1972 he moved -- for a short while -- to Aachen, Germany, with the group “Zilotes” (Zealots), while in 1977, he traveled to Athens to participate in “The Acharnians,” a stage production based on the comedy by Aristophanes and directed by Dionysis Savvopoulos. 400px A year later, a landmark album titled “I Ekdikisi tis Gyftias” (The Revenge of the Gypsies), was credited with changing the course and perception of Greek popular music. Recorded at Agrotikon, Papazoglou’s studio in Thessaloniki, it featured the joint efforts of composer Nikos Xydakis and lyricist Manolis Rasoulis, with Papazoglou adding his own touch to the vocals.