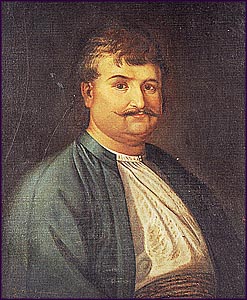 Rigas Feraios was born Antonios Kyriazis in 1757 to wealthy parents in Velestino,Thessaly near ancient Feres (Φεραί) for which he is named. He was educated at the Ampelakion School and later became a teacher in the village of Kissos. He is remembered as a Greek national hero, the forerunner and first martyr of the Greek uprising against the Ottoman Turks.

Rigas first fought the Turks in skirmishes on Mount Olympus. He later went to the monastic community of Mount Athos, then Constantinople. Arriving in Bucharest, he returned to school, learned several languages and eventually became a clerk for Greek governor Nicolaos Maurogenis.

In Bucharest, he learned about the French Revolution and came to believe something similar could occur in the Ottoman Empire, resulting in self-determination for its Christian population. He developed support for an uprising by meeting with Greek bishops and guerilla leaders and managed to win the support of at least one disgruntled Turkish Governor (Pashas).

The Ottoman Turkish occupation of Greece has been described as cruel and included drafting children between the ages of five and fifteen into military service, called the Pedomazema. Greeks were forced to live under many petty rules and several oppressive ones, including prohibitions on teaching Greek history or language, or riding on horseback. Churches were confiscated and converted to mosques.

Rigas wrote enthusiastic poems and books about Greek history and many became widely popular. One the most famous (which he often sang in public) is the Thourio in which he wrote, "It's better to have an hour as a free man than forty years as a slave." Greek: «Ως πότε παλικάρια να ζούμε στα στενά…. Καλλιώναι μίας ώρας ελεύθερη ζωή παρά σαράντα χρόνια σκλαβιά και φυλακή»… He urged Greeks to leave the Turkish-occupied towns for the mountains, where they might experience more freedom.

Rigas went to Vienna (with its large Greek community) as part of an effort to ask Napoleon for assistance and support. While in Vienna he edited a Greek-language newspaper, Ephemeris and created and published a proposed political map of Great Greece which included Constantinople as its capital. He printed pamphlets based on the principles of the French Revolution, including ("Declaration of the Rights of Man" and a "New Political Constitution of the Inhabitants of Rumeli, Asia Minor, the Islands of the Aegean, and the principalities of Moldavia and Wallachia"). He intended to distribute them in an effort to stimulate a Pan-Balkan uprising against the Ottomans.

While traveling to Venice in another attempt to meet Napoleon, Feraios was betrayed by a Greek merchant and was arrested at Trieste by the Austrian authorities (allies of the Ottoman Turks, the Austrians were concerned the French Revolution might provoke similar upheavals in Austria). He was handed over to the Ottoman Turkish governor at Belgrade where he was imprisoned and tortured.

From Belgrade, he was to be sent to Constantinople to be sentenced by the Turkish sultan. While in transit, he was strangled on the night of 13 June 1798 to prevent his rescue by a sympathetic Ottoman Turk governor (Pasvanoglou). His body was thrown into the Danube river.

Rigas' death didn't end his influence on Greeks and other leaders finally led the Greeks into revolution, beginning the Greek War of Independence in 1821.

A statue of Rigas Feraios stands at the entrance to the University of Athens.