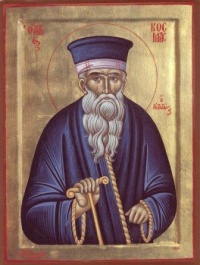 Saint Kosmas Aitolos (1714 - 1779) was a monk and itinerant preacher of the Greek Orthodox Church. He was born Kostas Dimitriou in the Greek village Mega Dendron in the region of Aetolia (present day Aitoloakarnania prefecture). He studied Greek and Theology before becoming a monk after a trip to Mount Athos where he also attended the local Theological Academy.

In those days, many Christians had given up their faith. Individuals and even entire villages converted to Islam. Local priests were often uneducated without knowledge of the Scriptures. The Church was in disarray. St Kosmas traveled through Western and Northern Greece urging Orthodox Christians to establish schools. Over sixteen years, he established over 200 schools, urging all Orthodox Christians to speak Greek because Greek is the "language of the Church". He also provided local churches with 4,000 baptismal fonts - from money collected from the rich - urging all believers to baptise their children.

With his preaching, teaching and baptising, St Kosmas brought about a revival of Christianity and revival of Greek conscience among his listeners.

To preserve the sanctity of the Sabbath, St Kosmas managed to get bazaars moved from Sunday to Saturday. This hurt the interests of many businessmen and, as a result, he was seized and hanged on August 24, 1779 near the city of Berat, Albania. His body was thrown into a nearby river with a large rock tied on it. It was recovered by Father Mark, the local priest, who buried it with honours.

Father Kosmas Aitolos was officially proclaimed Saint by the Orthodox Church of Constantinople on April 20, 1961. The memory of isapostolos Kosmas Aitolos is honoured on August 24, the date of his martyrdom.