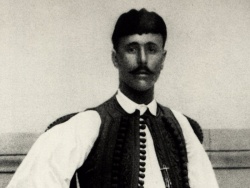 Spiros Loues was a Greek athlete who won the first ever Marathon in the 1896 Olympic games in Athens.

Loues was born on January 12, 1872, in Marousi, now a suburb of Athens but back then just a village.

There are differing opinions as to what Loues did to earn his living: Some say he was a shepherd, others say he was a newspaper salesman, still others that he transported water. He was entered in the Marathon run by his former commander, Major G. Papadiamantopoulos, who was in charge of organising the event and knew the running ability and stamina of his former soldier.

The marathon event was held on April 10, 1896 (March 29 OS). Loues had a slow start to his run while the more experienced athletes sought to impose a faster tempo on the event. Soon, one by one the other athletes started getting tired and half the athletes dropped out by the mid-way point. Meanwhile, the steady Loues passed them all. Papadiamantopoulos, on horseback, raced back to the stadium to report the development and soon the single word "Έλληνας!" (a Greek) was passed on from spectator to spectator. Pandemonium broke out when the 24-year old runner made his appearance at the renovated Panathenaic Stadium: Some were in tears, some were embracing each other, women were throwing florins from their necklaces at him and everyone waved Greek flags. His winning time was 2 hours, 58 minutes, 50 seconds.

Loues never ran again. Though he received many offers of financial assistance from wealthy Greeks for his achievement, he only accepted a horse and buggy to make his working life easier.

Loues was an honorary invitee to the 1936 Olympics in Berlin where, it is said, he presented Adolf Hitler with an olive branch from Greece - a peace symbol.