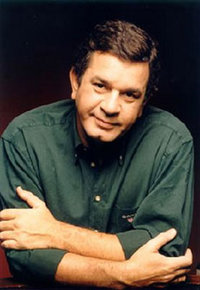 Stamatis Spanoudakis was born in Athens, Greece in 1948. Very early on he began to turned to music and began studying Classical music (guitar and theory) with Charalambos Ekmetsoglou.

After first hearing the Beatles, he gave up his classical studies and started playing guitar and bass guitar in a number of bands, through the sixties and the seventies. He lived in Athens, Paris and later London where he recorded his first albums.

He returned to classical music and his studies at the Würzburg State Conservatory, Germany where he studied composition with Professor Bertold Hummel and in Athens with Professor Constantinos Kydoniatis. From classical music he made the leap to Byzantine music, which gradually led him to Greek song. Since then he is consciously trying to reconcle his three musical influences (Rock, classical and Byzantine), in his music.

Stamatis Spanoudakis wrote numerous hit songs (words and music) for most major Greek singers. He also wrote the music for many succesfull films in Greece, Germany and Italy, for the theater and television and has recorded so far more than fifty albums.

He has worked with Pantelis Voulgaris on the films Stone Years, It's a long road and The Striker with the No. 9. He also composed the music for the films Absences by George Katakouzinos, Sudden love and Take care by Giorgos Tseberopoulos and others.

Since 1994, Spanoudakis concentrates on instrumental music, on Greek historical or religious themes, a music that has an unprecedent appeal, with all his records turning gold and platinum, with minimum effort and very rare appearances in public.