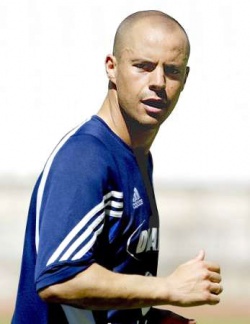 Giannakopoulos was born on July 12, 1974 in Athens. He started his football career at Ethnikos Asteras in 1993 before moving on to Paniliakos. After 3 years he moved on to Olympiakos where he played as a midfielder from 1997 until 2002.

He then went on a free transfer to Bolton Wanderers where he played through the 2007-08 season. His last ever goal for Bolton was a crucial one and came on April 26, 2008 when he scored in the 1-1 draw against Tottenham Hotspur F.C. helping Bolton avoid relegation.

At the end of the season Stelios was not offered a new contract and was released by the club fuelling speculation that he would be returning to his native Greece and finishing off his career at Olympiakos. However the player confirmed that he would prefer to stay in the Premier League, and was subsequently linked with a move to newly promoted English Premier League side Hull City, after interest from their new manager Phil Brown who worked with Stelios at Bolton.

On September 22, 2008, Hull City confirmed the capture of Giannakopoulos on a free transfer. The Tigers announced that he had joined the club until the end of the season with an option to stay longer. However, in January 2009, Stelios signed for AE Larisa. He stated that the reason for his return to the Greek League was lack of playing time at Hull.

He retired from football in December 2009.

Giannakopoulos was capped 77 times scoring 12 goals. He was a member of the National Football Team of Greece that won Euro 2004 in Portugal.