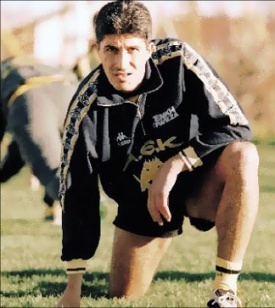 Arguably the best football defender ever to come out of Greece, Stelios Manolas played for AEK from 1980 until 1998. He made his debut in a match against Kastoria FC (1-1) on February 3, 1980.

Manolas was born on July 13, 1961 and started his playing career in the AEK youth academy. He broke into the senior squad at age 18 and became a mainstay in the AEK defence until May 17, 1998, when he played his last game against SKODA Xanthi.

During his career, Manolas won 4 championships and 3 Greek Cups. He played 436 games in the Greek league. He was capped 71 times by the National Football Team of Greece, scoring 6 goals, and was a member of the 1994 World Cup squad.

After his playing days were over, Manolas coached the Greek under-21 team.

Stelios Manolas is the uncle of present-day footballer Kostas Manolas.