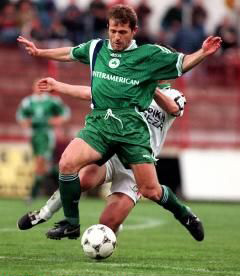 Stratos Apostolakis, born May 17, 1964 in Agrinio, was a Greek football defender who was nicknamed The Turbo, and started his career at Panaitolikos.

The former right-back was no stranger to controversy as a player, his switch from Olympiakos Piraeus to Panathinaikos Athens in 1990 led to the cancellation of the Greek Super Cup as the authorities feared riots.

As a footballer though he played his best years for PAO being one of the key players behind PAO's European runs in 1992 and 1996. He played with Panathinaikos through 1998.

He also spent six months as a coach with Panathinaikos in 2001, before resigning from his position at the end of the year and eventually taking up the task of coaching the Olympic team for Athens 2004.

During his playing career, Apostolakis was capped 96 times by the National Football Team of Greece (5 goals) and was a member of the 1994 World Cup squad. His 96 caps stood as a Greek record until it was broken by Theodoros Zagorakis.

His son Kostas is also a professional footballer, currently playing for Panathinaikos.