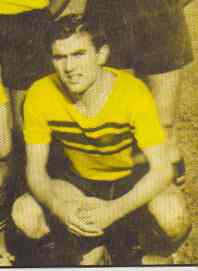 Thanasis Gouvas was a Greek football forward of the late 1950s - early 1960s.

Gouvas was born in Messolonghi, Central Greece in 1939. He took up track and field but switched to football and joining local club AE Messolonghi. In 1959, he became a player of AEK and played for AEK until 1963 when he joined Greek-American club Olympiakos Chicago.

Gouvas played for the Chicago club until 1967 when he returned to Messolonghi. He quit football the following year.