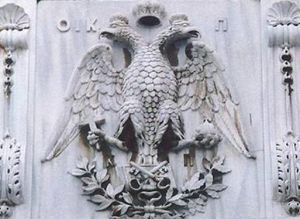 Two-headed eagles are common heraldic symbols in Eastern Europe, deriving from the emblem of the Byzantine Empire.

In Byzantine heraldry, the heads represent the two imperial thrones ruling the Roman Empire, of which the Byzantine empire was the eastern part. Michael VIII Palaeologus adopted the double headed eagle symbol after he had reconquered Constantinople from the Crusaders in 1261.The Russian tsars adopted the symbol both to position themselves as successors to the Byzantine state and to symbolize their dominion over the west (Europe) and the east (Asia).

The two-headed eagle is an adopted symbol of the following Greek entities: