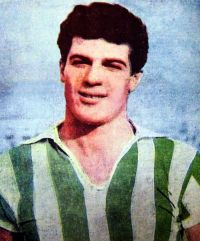 Vangelis Panakis (Greek: Βαγγέλης Πανάκης) was a Greek football forward for Panathinaikos during the 1950s and 1960s.

Panakis was born on June 8, 1933 and came to Panathinaikos from PAO Kalogreza, at age 18. He survived the difficult years of the 1950s when Olympiakos almost monopolised the championships of Greece and captained PAO in their glory years of the early 1960s. He stopped playing in 1965. Over all, he played in 171 league games, scoring 86 goals.

Panakis was capped 14 times by the National Football Team of Greece scoring 5 goals. He was the elder brother of Aegaleo footballer Apostolos Panopoulos (the family was known by either name).