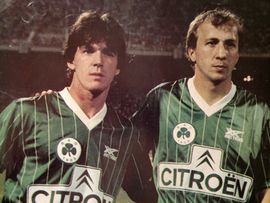 Velimir Zajec (rendered as Ζάετς in Greek) was a great Croat football player for Dynamo Zagreb, Panathinaikos and the Yugoslav National team (he was capped 36 times) in the 1980s.

Zajec was born on February 12, 1956 in Zagreb, Croatia. After ten years at Dinamo Zagreb, he came to Greece in 1984 to play for Panathinaikos. In Greece, Zajec was quite successful and was once named as foreign player of the year. His career with the greens lasted until 1988. During that four-year stint, he appeared in 67 league games scoring 11 goals.

After his playing career was over, Zajec turned to managing and coaching in Croatia (with Dinamo Zagreb), Greece (with Panathinaikos) and England with Portsmouth.