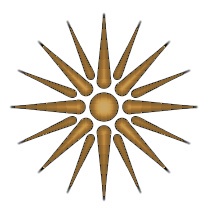 The Vergina Sun or Star of Vergina is a symbol of a stylised star with sixteen rays. It was found in archaeological excavations in Vergina, in Macedonia, northern Greece, where it was discovered on a golden larnax found by Professor Manolis Andronikos in 1977 in the tombs of the kings of the ancient kingdom of Macedon.

Andronikos described the symbol variously as a "star", a "starburst" or as a "sunburst".[1] He proposed that the larnax on which it appears belonged to King Philip II of Macedon, the father of Alexander the Great, though other historians have suggested that the tomb actually belonged to the later King Philip III Arrhidaeus.[2] The larnax is on display at the archaeological museum in Vergina, very close to where it was found. Another version of the Vergina Sun, with 12 rays, was found on the larnax of Olympias.

Interpretations of the symbol

The significance of the Vergina Sun is unclear. Archaeologists do not agree whether the sun was a symbol of Macedon, an emblem of Philip's Argead dynasty, a religious symbol, or simply a decorative design. Andronikos repeatedly interprets it as the "emblem of the Macedonian dynasty", though Eugene Borza has pointed out that it is widely used in Macedonian art.[3] Eight-pointed suns often appear in Macedonian coins and shields of that period, though the exact configuration of the Vergina Sun (rays of differing lengths around a circle containing a sunburst) had never been seen by archaeologists before being uncovered in Vergina. John Paul Adams cites its long-established use as a decorative element in Greek art (as well as in the Middle East and elsewhere) and concludes that it cannot definitively be said that it was either a "royal" or "national" Macedonian symbol.[4]

Following the discovery of the larnax, many Greeks adopted the Vergina Sun as a symbol of continuity between ancient Macedonian culture and modern Greece. The symbol is now widely used within Greece; the Vergina Sun on a blue background is commonly used as a state emblem of the three peripheries, the prefectures and the municipalities of the region of Macedonia. Flags displaying the Vergina Sun in this fashion have been used since the 1980s.

The symbol, however, has also been adopted by some among the large overseas Slavic "Macedonian" diaspora, and it was adopted by some nationalists in Yugoslavia's Socialist Republic of "Macedonia". When Yugoslavia broke up in 1991-1992, the newly independent and renamed Former Yugoslav Republic of "Macedonia" designated the Vergina Sun as its national symbol and displayed it on its new flag.

The decision caused controversy within the republic and in its relations with Greece. The republic's large Albanian minority complained that it was an ethnic symbol of the Slavic Macedonian majority and was not suitable for a multiethnic state.[5] Greek opposition was even more vehement. The Greek government and many Greek people saw it as a misappropriation of a Hellenic symbol and a direct claim on the legacy of Philip II. The dispute was exacerbated by clauses in the Republic of Macedonia's constitution that Greeks saw as a territorial claim on Greek Macedonia. A Greek Foreign Ministry spokesman claimed in January 1995 that "the symbol is Greek and has been stolen."

Although the Macedonian government denied any alterior motives, the flag became a major issue in wider political dispute between the two countries in the early 1990s. Greek protests led to the flag being banned from use in a variety of places, including the United Nations, the Olympic Games and offices of FYROM in the United States and Australia.

In response to the dispute, the symbol was widely adopted in many new contexts in Greece. It was added to the Greek 100 drachma coin in early 1992 and appeared on the arm patches of police in Athens. The Makedonia television station used it to replace the letter omicron in its logo and the Bank of Macedonia-Thrace adopted it as its symbol, as did some Greek military units. See also : Greek military :1st STRATIA and -34 Μ/Κ ΤAX.

In February 1993 the Greek parliament passed a bill designating the Vergina Sun as an official Greek national symbol.

The dispute was partially resolved in October 1995 under a compromise brokered by the United Nations. The symbol was removed from the flag of the Republic of Macedonia as part of an agreement to establish diplomatic and economic relations between the two sides. It was replaced by a new flag, which is currently in use, displaying a stylized eight-pointed sun. The discovery of a Bronze Age stone carving of a similar eight-pointed sun, found in an archaeological excavation at Kratovo in the FYROM, has led to some suggestions that this eight-pointed symbol (rather than the sixteen-pointed version found at Vergina) is a truer symbol of ancient Macedonian culture.