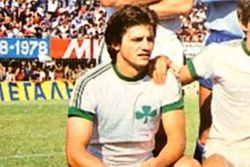 Walter Wagner was a German football striker during the 1970s and 1980s and one of the first foreigners to play in Greece.

Wagner's best years in Greece were with AEK where, from 1975 until 1977, he finished in the ranks of top ten goalscorers with 17, 11 and 12 goals respectively.

After the 1979 season, Wagner returned to Germany where he played for SV Roechling Voelklingen but came back to Greece, a year later, to play for Panachaiki. He left after one year and ended his career with German club SG Wattenscheid.