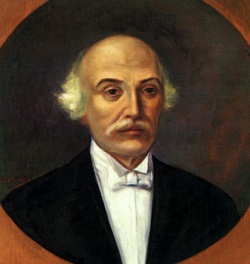 Valvis was born in 1800 in Messolonghi. He first studied theology but switched to law, furthering his studies in Italy. Valvis married Arsinoe Ratzikosta and fathered nine children. He twice served as prime minister but fell into hard times in his old age, dying impoverished in 1872 after he refused a state pension so as not to be a burden on the Greek state.