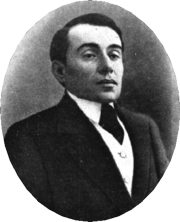 Constantine (Kostas) Christomanos was born in Athens in 1867 and was the first born son of Anastasios Christomanos, Chemistry professor at the University of Athens. He was a poet and writer with the largest body of his work being for theater.

His life was determined by a series of fateful downturns. A hunchback due to a childhood accident, he became extremely erudite and cultivated. At the age of 21 he went to live in Vienna and three years later, he was invited by the Imperial Court to teach Greek, accompany and read to Empress Elizabeth, also known as Sissy.

Christomanos found in the much older and sullen empress (54 when they met) a soul mate. His attraction to her caused a scandal when a Viennese paper published pages from his diary which described his impressions of the years he spent at her side. He was forced to return to Greece, where he founded the radical theater group "New Stage." On the 27th of February, 1901, he invited a group of playwrights and intellectuals to the ancient theater of Dionysus under the Acropolis where he presented the founding manifesto of the New Stage and invited them to write new Greek plays and to contribute to the renaissance of stage poetry and the dramatic arts in Greece. He was 34 at the time. The choice of repertoire (Ibsen, Goldoni, Tolstoy, Maeterlinck, Chekhov, Brieux, Daude, Courtelin), the teaching of the actors and the careful attention he paid to the visual effects created a new aesthetic for Greece. Christomanos became the mentor to the 13 year old actress Kyveli, who represented his muse, and mentored many more Greek actors who achieved fame.

Constantine Christomanos is credited with being the second owner of a car in Greece (if there is no other with the same name), a one-cylinder de Dion Bouton (the first car in Greece was produced by Peugeot and owned by a weathly Athenian, Nicholas Kontogiannakis).