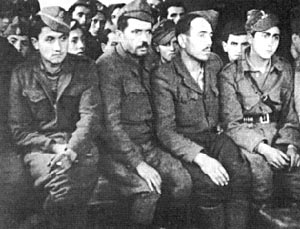 Guerillas listen to radio news announcement of the Varkiza Agreement.

On 12 February 1945 the Varkiza peace agreement was signed. It was an agreement that terminated institutionally the political and military fighting of December 1944 and aimed at reconciliating the opposite blocs of the country.

The minister of Foreign Affairs Ioannis Sophianopoulos, the minister of the Interior Periklis Rallis amd the minister of Agriculture Ioannis Makropoulos, participated in the talks, authorized by the government of Plastiras, while the delegation of ΕΑΜ consisted of Georgios Siantos, secretary of the central committee of the Greek Communist Party (KKE), Dimitrios Partsalidis, secretary of the central committee of ΕAM and Ilias Tsirimokos, general secretary of ELD. Each side had with it three military experts, while the proceedings were closely supervised by British dignitaries in Athens.

The agreement included nine articles on the basis of which civil liberties, and especially the freedom of the press and unionism freedoms were reinstated, a general extended amnesty was granted with the exception of offences of common law against life and property, while the government was committing itself to purge the civil services, gendarmerie, Security Police and police. For EAM/ELAS the obligation to liberate its prisoners and the disarmement of its armed sections was decided.

Last, the Greek government promised to form a national army to which the members of ELAS would be accepted and committed for the conduct of a genuine and free plebiscite as soon as possible within 1945.

The significance of the agreement is projected even more by the fact that its text was published in the Official Gazette, a fact that gave to its content the force of a law.

Nevertheless, the breach of its terms by both sides led to a new political polarisation and the dramatic events of the last stage of a harsh civil war that lasted until 1949. The extremities that occurred in its duration injured for several decades the coherence of the social fabric of the country and altered incorrigibly the productive and social geography of the Greek people.