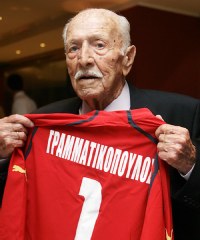 Grammatikopoulos was born in Piraeus, May 16,1907. He started his football career at Aris Nikaia before transferring to Olympiakos whose nets he guarded from his debut on November 4, 1928 until 1944 - his last game being a friendly against Goudi.

Grammatikopoulos saw action in World War II. After his playing career was over, he stayed on in football as a referee.

Grammatikopoulos attended veteran functions of Olympiakos up until his last days. He died on December 30, 2008.