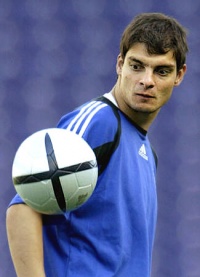 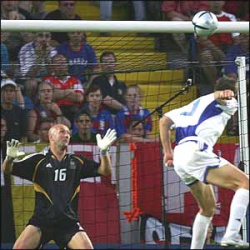 Charisteas scores the winning goal against France in Euro 2004

Angelos Charisteas (Άγγελος Χαριστέας) (born February 9, 1980 in Serres, Greece) is a retired striker and best known for his games at the Greece National Football Team. At the 2004 European Football Championship, he scored the lone goal in a 1-0 victory over France to lead his team to the semifinals. He went on to score the only goal in Greece's 1-0 win over Portugal in the final. In Euro 2004 he also scored against Spain (1-1), in the second game of Greece in the tournament.

Professionally, Charisteas firstly played for Aris Thessaloniki, in Greece, including a short loan to Athinaikos. He was signed from German Bundesliga side Werder Bremen in December 2004, after both leagues went on their annual winter break, thereby opening the transfer window. He was largely a fringe player at Bremen before Euro 2004, and his heroics did not change his status there, as he was the team's fourth-choice striker. Greece national team coach Otto Rehhagel publicly urged Charisteas to try to move to another club during the January 2005 transfer window in order to get first-team action. He joined Ajax Amsterdam in the Dutch Eredivisie.

The deal was logical for both clubs. Bremen wished to raise money and clear payroll in order to make a bid for Monaco striker Shabani Nonda. For its part, Ajax was hoping to find a replacement for Swedish international striker Zlatan Ibrahimovic, who was sold to Juventus before the 2004-05 season. After Ajax, Charisteas moved to Feyenoord Rotterdam where he played until the end of the 2007 season. Charisteas became one of the seven players and the only foreigner to have scored for both teams in the so called “Dutch Classico”.

In July 2007, he was signed by FC Nürnberg. After that he had short spells at Bayer Leverkusen (loan), Arles-Avignon and Schalke ‘04.

In the summer of 2011, Charisteas returned to Greece to play for newly-promoted Panaitolikos FC. He ended is his career in 2013 at Al Nassr in Saudi Arabia.

Charisteas has been capped 88 times for Greece. His 25 international goals place him second on the all-time list behind Nikos Anastopoulos.

Charisteas is now co-owner of a bar/restaurant in The Netherlands and sporting director for Aris.