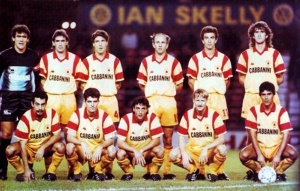 The team has played in the Greek Football A Division the following years:

In 1991, Athinaikos surprised the Greek football world by securing a place in the final of the Greek Cup, however, the Vyrona club lost the two-game final to Panathinaikos. Nevertheless, they represented Greece in the European Cup-Winners Cup as Panathinaikos had achieved a Champions' Cup berth. They were drawn against Manchester United and managed home and away regulation time draws before conceeding 2 goals in extra time at Old Trafford.