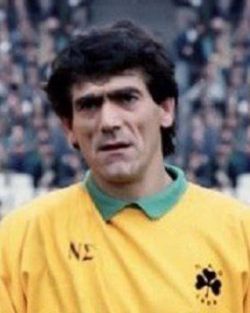 Arguably the best football goalkeeper Greece has ever produced, Nikos Sarganis was born on January 15, 1954, in Rafina, Attica.

Sarganis started his football career as a fullback at Ilisiakos. He switched to goalkeeper under the guidance of his coach, Christos Rimbas, himself a capable goalkeeper of the 1930s.

Sarganis then controversially joined Olympiakos' arch-rivals, Panathinaikos and played for the greens for the next five years. He ended his career with Athinaikos (1991 and 1992 seasons).

During his career Sarganis was capped 58 times by the Greek National Football Team. His international high point came on October 15 of 1980, when he preserved a 1-0 Greek victory in Copenhagen against Denmark. The Danish press gave him the nickname "phantom" by which he would be known throughout the rest of his career.

On May 8, 1988, Sarganis helped win the Greek Cup for Panathinaikos in a penalty shootout by saving two Olympiakos penalty shots while scoring one himself.