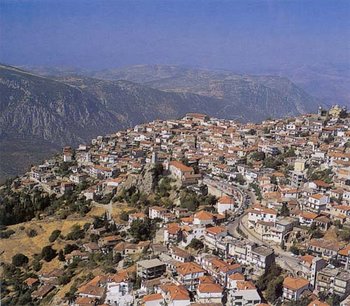 Arachova (or Arahova) is a mountain small town, its quaint houses are built up on the north slopes of Mount Parnassos, with 3300 inhabitants, 800 – 1100m altitude, 157 km from Athens, 25 km from Parnassus (Parnassos) ski centres, 8km from Delphi, and about 25km from beautiful beaches Antikira, Itea and Galaxidi.

In 2000 B.C. Homer mentioned in the Iliad two famous generals who took part in the Trojan War, Epistrophos and Schedias from the old towns of Anemoria and Kiparissos. These old towns were situated around where Arachova stands today. Later, in about 334 BC Philip II of Macedonia destroyed both towns and their populations dispersed over the hills until over the years one new town, Arachova, was built.

The God Apollo from the «Katoptireon» which is over Arachova shot his arrow in a ravine in Delphi which today is called «Priest's wife» (Papadia) or «the bear's stream» (Arcoudorema) and killed the dragon in order to leave the water running free for the people.

In the Christian ages, Saint George killed the Dragon for the same reason. Today the Arachovians sing:

«Dragon let water free to run so to drink the fiesta...»

The area reveals its past: at Livadi near Arahova Coryceo Antro (Corycian Cave) has been discovered prehistoric cave-temple dedicated to God Pan and where women from the surrounding areas would gather every five years, wearing disguises, to dance by torch light through the night.

According to the local inhabitants "our ancient ancestors mortally injured Vrennos, the chief of Galats and together with the deep snow that was falling that night, they turned the barbarians in a disorderly withdrawal."

Later in 1826 at the Arachovas’ battle victory, the Greeks over the Ottomans with their chief Georgios Karaiskakis, in similar weather conditions, Mortally injured the Turkish chief Moustabey and, together with the deep snow that was falling at that time, turned the barbarians in disorderly withdrawal.

Pausanias description about the salvation of the oracle and the description of «Historica» about the battle of Arahova , the one with the aid of God Apollo and the other by the grace of Saint George, both indicate the same undoubtable continuation, the same legend and the same historical incidents that took place on this land from the ancient times till today.

There are two theories as to the origin of the name Arachova. The first theory is that the name is Slavian, being composed of two words Ara and Hova or the place of the walnut trees. This is as possibility as there were and still are, a lot of walnut trees in the area. The second theory also says that the name is composed of two words, Greek ones this time Rachi and Vio or one who lives on the hills of a mountain.

This second theory is more probable as the village is built on five small hills. Any way the village has been known through the centuries as Rahova or Arahova. Although the date Arahova was established is unknown, it must have been around 800-850 A.D. as the church of St. John was built in 900 A.D.

Arahova (Arachova) with that name has been rewarded with a lot of honourable pages in the modern History of Greece.

Since thee l4th century A.C. pilgrims from all over the world pass by Arachova and there are written testimonies of famous people about the inhabitants of Arachova. Should somebody, who does not know anything about this town, read this information, he will think of it as exaggerated. But for the people who know Arachova, this information is very much real.

In later years visitors, such as the Italian Kiriakos (1435) the Frenchman Spon (1676), the Swede Sturzen

Becker (1784) and the Englishman Clark (1801) all described the village as "a well populated town". They also mentioned an abundance of churches. Spon wrote of three in particular St. George, Panagia and St. Nicholas.

The Metropolitan Bishop of Athens, Meletios, in his «Geography» states about Arachova: «The most famous town in Parnassus».

Lord Byron in 1809 said about the Arachovian women, that «they were very careful and polite».

The English painter Rey in 1894 -as it is stated in Takis Lappas book- writes: «We cannot help admiring all the time the proud and big stature of the men of this village. As far as the women are concerned, they are able to become the best models in the art of sculpture».

Eva and Angelos Sikelianos spread all around the world, the reputation of Arachova. Eva by teaching the art of handmade woven articles and by giving advices on it; Angelos on the other hand, by his highly intellectual poetry.

As it has been above stated, God Apollo passed by Arachova when he first went to the location where he established his Oracle. He also killed the dragon in the «Arkoudorema» (or the «bear's stream»), which is situated above the rock of Petritis, above Arahova.

Consequently, however, Arahova , since the ancient days, has been the welcoming host for all the people and Gods visiting the Oracle, even before the town of Delphi was set up. 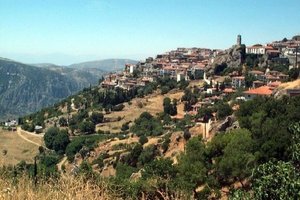 A very special event "Panigyraki" in the spring is the huge celebration in honour of Saint George, Arachova’s patron saint. It starts on the eve of April 22nd and lasts for three days with a village festival of eating, drinking and dancing plus a race for old men dressed up in local costume, called " fustanella", up to the hill of Saint George.The winner gets a lamb that is brought down from Parnassus by the local shepherds and the survivors get their chance again next year. If the saint day falls within lent however, it is postponed to the Tuesday after Easter.

Whoever has not been for Easter in Arachova, has not watched the procession with the silver icon of the protector of the town Saint George, has not seen the well-built Arahovians in their national costumes, has not tasted traditional grilled meat and appetizers, has not tried the pure Arahovian wine, for sure he has missed one of the best Greek celebrations. Should he be dead, it's a pity that he cannot enjoy that, but should he be alive, he has to be at Easter time in Arahova. The whole atmosphere is like a miracle. Nature and God are resurrected.

Skiing winter in Greece is closely connected to Arachova. Also it is ideal place for a cool summer vacation, close to beaches of Itea, Antikira and mountain hiking trails.

Besides its rich archaeological and historical heritage Arachova and the surrounding area also present increased natural interest, since its flora and fauna are particularly rich. It’s more than relaxing for one to walk along the beautiful fields and the sides of Parnassos in winter peace as well as during the season when snow melts and nature blooms in full splendour.

All the people that have been in Arachova speak with the best words about her. She is like a natural balcony of Parnassus, on whose verandas the sun rests. The Arahovians used to be in the past and still are in the present the «eagles» of Zeus who fight for the summits of Parnassus. The Arahovians are the only companions of Parnassus, since they have been its mates in life and since the ancient days they have been on its summits and slopes: Kelaria and Fterolaka. On Parnassus' summits the Arachovians sing along with «Pan» and in the evenings they sleep with the nymphs.