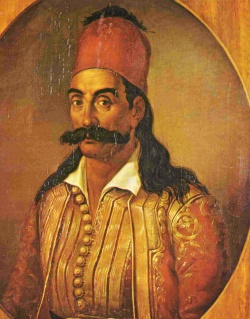 Georgios Karaiskakis, (Γεώργιος Καραϊσκάκης in Greek), was a leader of the Greek War of Independence.

Karaiskakis was born in Mavromati, Karditsa prefecture, in 1782 to nun Zoe Dimiski and was known as the "son of the nun" for his entire life. Theodoros Kolokotronis, the other great Greek revolutionary, called him "gypsy" on account of his dark complection.

During the early stages of the war, Karaiskakis served in the militia in the Morea (Peloponnesus), but was barred from fighting due to the intrigues that divided the Greek leadership. Nonetheless, he recognized the necessity of providing Greece with a stable government and was a supporter of Ioannis Kapodistrias who would later become Greece's first head of state.

Karaiskakis's reputation grew during the middle and latter stages of the war. He helped to lift the first siege of Mesolonghi in 1823, and attempted to save the town from the second siege in 1826. That same year, he was appointed commander-in-chief of the Greek patriotic forces in Rumeli, achieving military successes against the Ottomans in Domvrena, Distomo and Arahova which were especially welcome amid the disasters that were occurring elsewhere.

Karaiskakis in pursuit of Kioutahes

In 1827, Karaiskakis participated in the failed attempt to raise the siege of Athens, where he fought the army of Kioutahes Pasha, and attempted to prevent the massacre of the Turkish garrison stationed in the fort of Saint Spyridon. He was killed in action in a skirmish against the Turks at Neo Phaliro, near Athens, on April 23, 1827. While injured he continued to fight calling out to his men "Fight for me and liberate the city of Athena. Give my sole property, my gun, to my son." He was buried at Salamina.

Karaiskaki Stadium in Neo Phaliro is named for him.