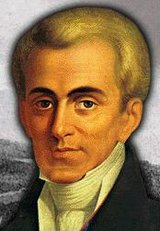 Ioannis Kapodistrias was born in Corfu (Kerkyra) in the Ionian Islands, which at the time of his birth were a possession of Venice. He studied medicine, philosophy and the law at Padua in Italy. When only 21 years old, in 1797, he started his practice as a doctor in his native island of Corfu, in order to alleviate human misery. He was to the end of his life a deeply liberal thinker and a true democrat, though born and raised as a nobleman. An ancestor of Kapodistrias' had been created a conte (count) by the Charles Emmanuel II, Duke of Savoy, and the title was later (1679) inscribed in the Libro d'Oro of the Corfu nobility. (The title originates from Capo d'Istria, the Italian name for the port of Koper, now in Slovenia). His mother's family, the Gonemi, had been listed in the Libro d'Oro since 1606. In 1802 Ioannis Kapodistrias founded two important scientific and social progress organisations in Corfu, the "Society of the Friends" (Etairia ton Philon) and the "National Medical Association", of which he was an energetic member. In 1799, when Corfu was briefly occupied by the forces of Russia and Turkey, Kapodistrias was appointed chief medical director of the military hospital.

Minister of the Septinsular Republic

After two years of revolutionary freedom, triggered by the French Revolution and the ascendancy of Napoleon, the seven Ionian islands were recognised in 1801 by Russia and the Ottoman Empire as a free and independent state--the Septinsular Republic--ruled by its nobles. Kapodistrias, substituting for his father, became one of two ministers of the new state. Thus, at the age of 25, Kapodistrias became involved in politics. In Cephallonia he was successful in convincing the populace to remain united and disciplined to avoid foreign intervention and, by his argument and sheer courage, he faced and appeased rebellious opposition without conflict. With the same peaceful determination he established authority in all the seven islands. He listened to the voice of the people and initiated democratic changes to the "Byzantine Constitution" that the Russian-Ottoman alliance had imposed, which caused the Great Powers to send an envoy, George Motsenigo, to reprimand him. However, when the envoy met Kapodistrias, he was impressed by the political and ethical worth of the man. When elections were carried for a new Senate, Kapodistrias was unanimously appointed as Chief Minister of State. He cared for the people as much as when he was a doctor, and was loved by them. In December 1803 a less feudal and more liberal and democratic constitution was voted by the Senate. As a minister of state he organised the public sector, putting particular emphasis on education. 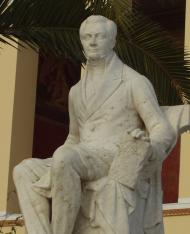 A statue of John Capodistria on Panepistimiou Street, in front of the National Capodistrian University, Athens

In 1809 Kapodistrias entered the service of Alexander I of Russia. His first important mission, in November 1813, was as unofficial Russian anbassador to Switzerland, with the task of helping disentangle the country from the French dominance imposed by Napoleon. He secured Swiss unity, independence and neutrality, which was guaranteed by the Great Powers, and actively facilitated the initiation of a new constitution for the 19 cantons that were the component states of Switzerland with personal drafts. In the ensuing Congress of Vienna, 1815, as the Russian minister, he counterbalanced the paramount influence of the Austrian minister, Prince Metternich, and insisted on French state unity under a Bourbon monarch. He also obtained international guarantees for the Constitution and neutrality of Switzerland through an agreement among the Powers at the Vienna Congress. After these brilliant diplomatic successes, Alexander I appointed Kapodistrias joint Foreign Minister of Russia (with Karl Robert Nesselrode).

He was always keenly interested in the cause of his native country, and in particular the state of affairs in the Seven Islands, which in a few decades' time had passed from French revolutionary influence to Russian protection and then British rule. He always tried to attract his Emperor's attention to matters Greek.

Kapodistrias visited his Ionian Islands homeland, by then under British rule, in 1818, and in 1819 he went to London to discuss the islanders' grievances with the British government, who told him that the islands were none of Russia's business. Kapodistrias became increasingly active in support of Greek independence from the Ottoman Empire, and in 1822 this led to his resignation as Foreign Minister.

Kapodistrias retired to Geneva,where he was greatly esteemed, having been made an Honorary Citizen for his past services to Swiss unity and particularly the cantons. In 1827 he learned that the Third National Assembly had, as he was the most illustrious Greek-born politician in Europe, elected him as the first head of state of newly-liberated Greece, with the title of Κυβερνήτης (Governor).

After touring Europe to rally support for the Greek cause, Κapodistrias landed at Nafplio in January 1828. It was the first time he had ever set foot on the Greek mainland, and he found a discouraging situation there. Even while fighting against the Ottomans was still going on, factional and dynastic conflicts had led to two civil wars which ravaged the country. Greece was bankrupt and the Greeks were unable to form a united national government.

On his arrival, Capodistria launched a major reform and modernisation programme that covered all areas. He re-established military unity, bringing an end to the second phase of the civil war; re-organised the military, which was then able to reconquer territory lost to the Ottoman military during the civil wars; introduced the first modern quarantine system in Greece, which brought epidemics like typhoid fever, cholera and dysentery under control for the first time since the start of the War of Independence; negotiated with the Great Powers and the Ottoman Empire the borders and the degree of independence of the Greek state and signed the peace treaty that ended the War of Independence with the Ottomans; introduced the phoenix, the first modern Greek currency; organised local administration; and, in an effort to raise the living standards of the population, introduced the cultivation of the potato into Greece.

Furthermore, as part of his programme he tried to undermine the authority of the traditional clans or dynasties which he considered the useless legacy of a bygone and obsolete era. However, he underestimated the political and military strength of the capetanei (commanders) who had led the revolt against Turkey in 1821, and who had expected a leadership role in the post-revolution Government. When a dispute between the capetaneοi of Laconia and the appointed governor of the province escalated into an armed conflict, he called in Russian troops to restore order, because much of the army was controlled by capetanei who were part of the rebellion.

In 1831 Κapodistrias made the fatal mistake of imprisoning Petrobey Mavromichalis, the Bey of the Mani Peninsula, one of the wildest and most rebellious parts of Greece. This was a mortal offence to the Mavromichalis clan, and on October 9, 1831 (September 27 OS) Capodistria was assassinated by Petrobey's brother and son on the steps of the church of Saint Spyridon in Nafplio. He was succeeded as Governor by his younger brother, Augustinos Kapodistrias.

Kapodistrias is greatly honoured in Greece today. The University of Athens is named "Capodistrian" in his honour; the 20-lepta coin bears his face, and a local re-organisation programme that reduced the number of municipalities in the late 1990s also carries his name. The fears that Britain, France and Russia had of any liberal and Republican movement at the time, due to the Reign of Terror in the French Revolution, led them to insist on Greece becoming a monarchy after Capodistria's death.