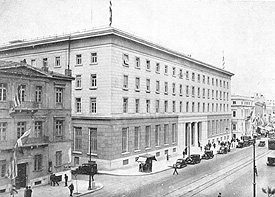 View of the Head Office of the Bank of Greece in the late 1930s.

The Bank of Greece is the central bank of the country. It was established in 1927, by an Annex to the Geneva Protocol of September 15, 1927, a few years after World War I and the Asia Minor Disaster. In the 75 years of its existence, the Bank has had 18 Governors and 28 Deputy Governors.

The Bank began operations on May 14, 1928, under the first Governor Alexandros Diomedes. Its 25th and 50th anniversaries (under Governors Georgios Mantzavinos and Xenophon Zolotas, respectively) were celebrated with pomp and circumstance. The 75th anniversary occured at a time when the Bank, under Governor Nicholas C. Garganas, was a member of the European System of Central Banks.

The Bank's Head Office is located in the centre of the city of Athens, at 21 El. Venizelou Str., opposite the three historical buildings of the Academy, the University and the National Library. The building was designed by architects K. Papadakis and N. Zoumpoulidis and its foundations were laid in 1933. The official inauguration took place in 1938, under Governor Emmanouil Tsouderos, and was accompanied by the publication of an album with photographs of the new building.