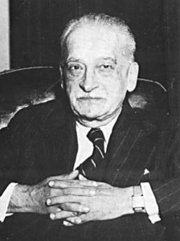 Emmanouil Tsouderos was a political and financial figure of modern Greece as well as the father of Virginia Tsouderou.

He was born in 1882 in Rethymno, Crete and studied economics in Greece and abroad. He returned to Crete and was elected Member of Parliament of the Cretan Legislature (1906 - 1912). After the union ("Ενωσις") of Crete with Greece, he was elected to the Greek Parliament and served as Minister of Transportation under Eleftherios Venizelos and Minister of Finances under Themistoklis Sofoulis. He also served as governor ("Δοιηκητής") of the Central Bank of Greece.

In 1941 he succeeded Alexandros Korizis as Prime Minister as the Germans were marching towards Athens. He fled with King George II to Crete where he organised his forces to face the coming German invasion. Tsouderos fled again during the battle of Crete to the Middle East and later Egypt, where he headed the government in exile until 1944. He served in the subsequent government in exile under Sofoklis Venizelos and, after the war, in different capacities until his death in Italy in 1956.