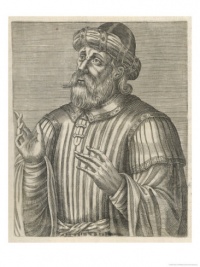 Constantine XI Paleologus, also known as Constantine Dragases (Gr. Κωνσταντίνος ΙΑ' Δραγάσης Παλαιολόγος), (February 9, 1404–May 29, 1453) was the last reigning emperor of the Byzantine Empire from 1449 to his death. Constantine was born in Constantinople, the eighth of ten children of Manuel II and Helena Dragas, the daughter of the Serbian prince Constantine of Serres. In a variant of the Byzantine practice of adopting the distaff surname where it connoted more prestige, Constantine liked to be known by his mother's name of Dragas (Serb. Dragaš) or Dragases, which she inherited from her Serbian father. He spent most of his childhood in Constantinople under the supervision of his parents. Constantine became the despotes of Morea (the Medieval name for the Peloponnesus) in 1443 which he ruled from the palace in Mystras. In 1443, he launched an invasion of the Latin Duchy of Athens from Morea, swiftly conquering Thebes and Athens and forcing the Florentine duke to pay him tribute. However, his triumph was short-lived, as the Ottomans soon intervened and drove him back into Morea.

Constantine married twice: the first time on July 1, 1428 to Maddelena Tocco, the niece of the Italian ruler of Epirus, who died in November 1429; the second time to Caterina Gattilusio, daughter of the Genovese lord of Lesbos, who also died (1442). Some sources record that had no children by either marriage, others that he had one daughter, Magdalena.

When his brother, the Emperor John VIII Palaeologus (Gr. Ιωάννης VIII Παλαιολόγος), died, a dispute erupted between Constantine and his brother Demetrius (Gr. Δημήτριος) over the throne. They appealed to the Ottoman sultan Murad II to arbitrate the disagreement. He chose Constantine, who was crowned in Mystras on January 6, 1449. He attempted to marry a distant cousin, the widow of Murad II, but the courtship failed. Soon afterwards, Sultan Mehmed II began agitating for ownership of Constantinople. Desperate for any type of military assistance, Constantine appealed to the West, but he was refused help unless he united the Orthodox Church with the Roman Catholic Church, which was a policy pursued by his predecessors. He declared the churches united after the Council of Florence in 1452, but the union was overwhelmingly rejected by his subjects and it dangerously estranged him from his chief minister and military commander, the Grand Duke (Gr. Μέγας Δούκας)Lucas Notaras (Gr. Λουκάς Νοταράς).

Mehmed II offered Constantine the chance to rule unmolested in Mystras before the siege of Constantinople, but he refused, with the words: "ΤΟ ΔΕ ΤΗΝ ΠΟΛΙΝ ΣΟΙ ΔΟΥΝΑΙ ΟΥΤ' ΕΜΟΝ ΕΣΤΙΝ, ΟΥΤ' ΑΛΛΟΥ ΤΩΝ ΚΑΤΟΙΚΟΥΝΤΩΝ ΕΝ ΑΥΤΗ. ΚΟΙΝΗ ΓΑΡ ΓΝΩΜΗ ΠΑΝΤΕΣ ΑΥΤΟΠΡΟΑΙΡΕΤΩΣ ΑΠΟΘΑΝΟΥΜΕΝ ΚΑΙ ΟΥ ΦΕΙΣΟΜΕΘΑ ΤΗΣ ΖΩΗΣ ΗΜΩΝ", preferring to fight and die defending his Empire. His wish would come true, as he was killed while defending the walls of Constantinople on May 29, 1453 (see Fall of Constantinople). The Emperor, when realising that the end had come, discarded his purple cloak and charged into the breach. Some sources record that he was only recognized afterwards by his purple boots; others that the Turks were never able to identify his body, and so the last emperor of Rome was buried in a mass grave along with his soldiers. Some Orthodox Christians consider him a saint, but he has not been officially recognized as such.