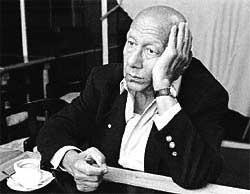 Cornelius Castoriadis (March 11 1922-December 26 1997) was born in Constantinople (Istanbul) and his family moved soon after to Athens. After earning degrees in Political Science, Economics and Law from the University of Athens, he moved to Paris to continue his studies in 1945. He had been an active Trotskyist in Athens but broke with the Trotskyists in Paris in 1948 and joined Claude Lefort and others in founding the group and journal "Socialisme ou Barbarie" (1949-1966), which included Jean-François Lyotard, Pierre Guillaume, and Guy Debord as members for a while.

At the same time, he worked as an economist at the Organisation for Economic Co-operation and Development until 1970, which was also the year when he obtained French citizenship. Consequently, his writings prior to that date were published pseudonymously, as Pierre Chaulieu, Paul Cardan, etc.

In the latter years of Socialisme ou Barbarie he came to reject the Marxist theories of economics and of history, especially in an essay on Le mouvement révolutionnaire sous le capitalisme moderne. Although he was active in the political movements of the 1960s, his interests shifted from direct political action and revolution towards seeking to understand the relationship of the human individual to social formations.

This led him towards more philosophical and psychoanalytic understandings of human social and political life and he trained as a psychoanalyst and began to practice in 1974. In his 1975 work L'institution imaginaire de la société (Imaginary Institution of Society) and in Les carrefours du labyrinthe (Crossroads in the Labyrinth) published in 1978, Castoriadis began to develop his distinctive understanding of historical change as the emergence of irrecoverable otherness that must always be socially instituted and named to be recognized. Otherness emerges in part from the activity of the psyche itself. Creating external social institutions that give stable form to what Castoriadis terms the magma of social significations allows the psyche to create stable figures for the self, and to ignore the constant emergence of mental indeterminacy and alterity.

In 1980 he joined the faculty of the École des Hautes Études en Sciences Sociales.

In his 1980 Facing The War text he viewed that Russia had become the primary world military power. To sustain this, in the context of the visible economic inferiority of the Soviet Union in the civilian sector, he proposed that the society may no longer be dominated by the party-state bureaucracy but by a "stratocracy" - a separate and dominant military sector with expansionist designs on the world. He further argued that this meant there was no internal class dynamic which could lead to social revolution within Russian society and that change could only occur through foreign intervention. This led some people to suggest he had become a cold war apologist.

One of Castoriadis's many important contributions to social theory was the idea that social change involves radical discontinuities that cannot be understood in terms of any determinate causes or presented as a sequence of events. Change emerges through the social imaginary without determinations, but in order to be socially recognized must be instituted as revolution. Any knowledge of society and social change “can exist only by referring to, or by positing singular entities ... which figure and presentify social imaginary significations.”

Concerning his political views, he has been called the "Philosopher of Autonomy". He defined an Autonomous society in contrast to a Heteronomous one. While all societies make their own imaginaries (institutions, laws, traditions, beliefs and behaviors), autonomous societies are those that their members do know this fact, and explicitly self-institute. In contrast, the members of heteronomous societies attribute their imaginaries to some extra-social authority (i.e. God, ancestors, historical necessity).