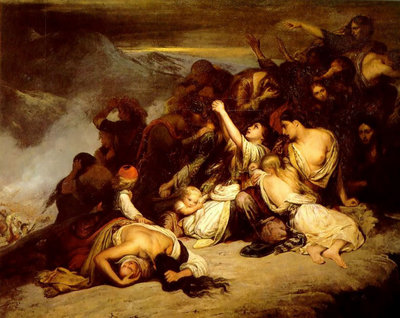 A painting by Ary Scheffer(1795-1858), "The women, entrapped, turned towards the steep cliff. It was December 16, 1803 when the dance began. As the enemy charged against them, the women one-by-one threw their children from the cliff before jumping after them themselves. The decision: to choose death over enslavement" (1827 - Oil on canvas, Musιe du Louvre, Paris, France).

In Greek folklore, the Dance of Zalongo (or Zalongo Dance) holds a very special and emotive place. The historic events that surround the heroic act of 63 Souliotises (women from Souli), were first reported in the Ethnic Newspaper of Nafplion, Peloponnese, on June 18, 1932.

Souli is a village in the Thesprotia prefecture of western Epirus. It climbs up the Zalongo mountaintop, which sports a mighty deep gorge, that received the women of Souli, when they decided to die rather than fall in the hands of the enemy. During the War of Independence, the men of Souli fought and fell heroically, one by one. On December 16 1803, the 63 Souliotises, holding their children in their arms formed a circle and performed the Zalongo Dance. Each one led a full circle and on reaching the crater, first threw in the child, then herself jumped into the abyss.

In this way they fell until none was left.

The song which the Souliotises sang while dancing their macabre syrtos was based on a poem by the Greek national poet Dionysios Solomos, best known from his verses that became the Greek National Anthem; it said:

Farewell miserable world,
Farewell oh sweet life,
And as for you ill-fated home
Farewell for ever...