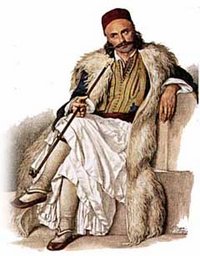 A Souliot in traditional dress. 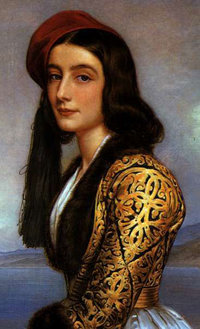 A Souliotissa, Katharina "Rosa" Botsaris was in the service of Queen Amalia of Greece. She was an admired beauty at European courts.

Souli (or Suli) is a historic village, 73 km Southeast of Igoumenitsa, in Thesprotia prefecture of Epirus.

In the 16th and 17th Century, inhabitants of Thesprotia established four main villages (Souli, Kiafa, Avariko and Samoniva) in an attempt to live in a remote mountainous area relatively free from Ottoman yoke. By 1750, this arrangement evolved into a semi-autonomous confederation of nearly 80 villages with a population of 25,000 inhabitants.

The Ottoman Turks did not react to this situation preferring to use the Souliotes as a buffer zone between themselves and the Venetians who occupied the Ionian Islands. However, the Venetians were replaced by the French who sought close relations with Souli. This action was viewed as an act of aggression by the Turks who then encouraged the local Albanian pashas to put an end to it.

Twice Ali Pasha tried to invade Souli (1791 and 1792) and twice he failed. However, his third attempt (1802 - 1803) proved successful as the Souliotes ran out of ammunition and food and were forced to accept Ali Pasha's terms. On December 15, 1803, they abandoned their villages for other parts of Epirus. 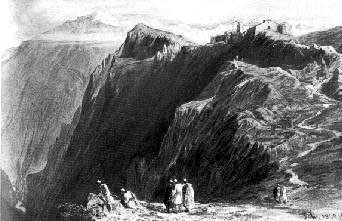 The Rocks of Suli, drawing by Edward Lear, 1849

Ali Pasha, however, broke his truce and attacked some fleeing Souliotes at Zalongo. The battle of Zalongo is remembered today for the sacrifice of the Souliote women who preferred to jump off its cliffs, to their death, rather than fall into the hands of Ali Pasha's soldiers. Survivors were forced to flee once more mostly to Central Greece.

In the ensuing wars between Ali Pasha and the Turkish Sultan, the Souliotes took the side of the former after being promised that they would be allowed to return to their villages. Unfortunately, the Sultan was victorious and on July 28, 1821, they were forced to leave for good.

The Suliots now supported the Greek revolution, which started in 1821. The Suliot leaders Markos Botsaris and Kitsos Tsavellas became famous generals in the War of Independence.

Suliot troops were fighting on the whole northern mainland of Greece. Together with volunteers from all Europe many of them lost their life in defending the city of Messolongi. Lord Byron, the most prominent European volunteer and commander in chief of the Greek army in Western Greece, tried to integrate them into a regular army and failed. The clan structure of the Suliots made this integration impossible.

None of the Souliots of this time saw the liberation of their native place. Until 1909 the Turks kept a military base on the fortress of Kiafa. Finally in 1913, during the Balkan War, the Greek army occupied large parts of Epirus and made it eventually a part of Greece.

The price the Souliots paid for their uncomprimising stand, was high. The Greek-Albanian community who did so much for the independence of Greece, has been lost in history. Their native villages lie in ruins, their descendants are spread over all Greece and the whole world.