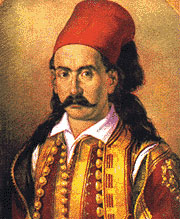 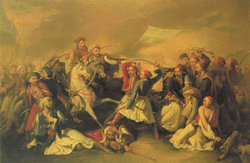 The death of Markos Botsaris

Markos Botsaris was a general who fought during the Greek War of Independence. He was born in 1790, in Souli to Kitsos Botsaris. Alongside his father, Markos Botsaris fought first against the Albanian Ali Pasha and later with him in the latter's rebellion against the Turkish Sultan.

Botsaris left Souli for Corfu where he joined the French army only to return to the Greek mainland when the War of Independence broke out on March 25, 1821. He took part in the ill-conceived Battle of Peta and in the first siege of Mesolonghi where he distinguished himself not just with his bravery but also his unselfish attitude, turning down promotions and honours from the revolutionary government.

In August 1823, the Turks built up their forces at Karpenisi for an attack at Mesolonghi. Botsaris led a surprise attack on their positions on August 9. In the ensuing Battle of Kefalovriso, the Greek forces won a great victory but Botsaris himself was shot in the forehead and killed. He was buried in Mesolonghi, mourned by the local population.