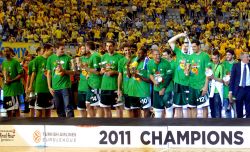 The player from Kastoria started his career with his home team in 1994 and stayed there for 5 years. In the summer of 1999, he was transferred to Iraklis BC and was a starter in his second season. In the summer of 2004, he made a big step in his career with his move to Panathinaikos BC. He is a member of the national team. With Panathinaikos he has won the Greek Championship twice, the Greek Cup and the Euroleague.

He has also won the European Basketball Championship in 2005 with the Greek national team and was a member of the team which won silver in the 2006 FIBA World Championship in Japan.