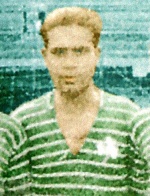 Diomedes Symeonidis was a Cypriot footballer, one of the founders of APOEL.

Symeonidis was born in 1910 and was, along with his brother Christos, a footballer of Aetos - a local Nicosia club - until 1926 when met Georgios Poulias. The two men founded POEL which evolved into APOEL. Symeonidis played for the team he co-founded until 1929 when he transferred to Panathinaikos in the Greek League. He was part of the team that demolished Olympiakos 8-2 and he scored the first and the fourth goal. His career at PAO ended in 1934 due to an injury and Symeonidis returned to Cyprus where he was player/coach for APOEL until 1936.

During his career, Symeonidis was capped 5 times by the National Football Team of Greece.